This past Sunday at 7:30AM, the beginning of the workweek in the UAE, a gentleman walked into a government office in Dubai and saw very few, if any, employees at their desk. He went to find the supervisor and was told they were not at work yet. For many people who go to offices anywhere in the world early in the morning they would not be surprised that many of the employees or managers are not at their desk. However, in this case, the person who walked in was the Ruler of Dubai and the Prime Minister of the United Arab Emirates, His Highness Sheikh Mohammed bin Rashid Al Maktoum. 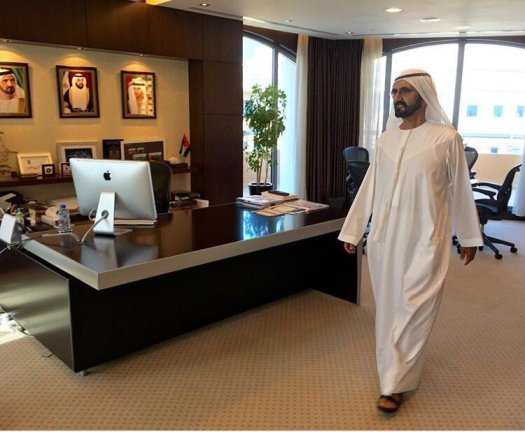 Sheikh Mohammed decided to do an unannounced visit to a few Dubai government offices. This is not the first time he has done this, and I suspect will not be the last. He seems to be a practitioner of a style popularized in the 1970’s & 80’s called Management by Walking Around (MBWA),

I first learned of MBWA when I worked in Public Television in the United States in the early 1980’s. Our station aired a program hosted by Tom Peters which he discussed various management techniques including MBWA which was a style was used by Hewlett-Packard executives in the 70’s. MBWA is defined in the business dictionary as a style of business management, which involves managers wandering around, in an unstructured manner, through the workplace(s), at random, to check with employees, or equipment, about the status of ongoing work.

I purchased the book, “In Search of Excellence” by Tom Peters and Robert Waterman after watching the show and to this day practice this particular management style though many executives now considered it out of style moved on to new modern management styles that are the current rage, though I can’t tell you what they are.

While Sheikh Mohammed visited the offices he had his aide video record him walking around in the supervisor’s office, looked at the pictures on the wall, (in which he is one of the portraits), then went to their desk looked at their computer or book and that ended the 14 second video. He then aired the tape on Twitter on @DXBMediaOffice which has 1.55 million followers, and who knows how many outlets have picked up the story in the past 36 hours.

According to a Bloomberg article For Dubai Government Workers, the Wrong Day to Turn Up Late by Zainab Fattah: “The video was posted on Twitter by Dubai’s media office, which noted that managers were no better than rank-and-file employees. Videos of the ruler also visiting the Dubai municipality and the city’s international airport were also shared on Twitter.” NOTE: You can see the video in this article.

“He certainly wanted to send a message,” said Mona Al-Marri, director-general of the government of Dubai’s media office. “Timeliness starts at the top and we won’t go after employees when their bosses aren’t there.’’ “Khalifa Saeed, who heads government protocol, shared several pictures and videos on Instagram showing Sheikh Mohammed touring the airport and casually greeting people waiting to get their passports stamped.”

I do not know if Sheikh Mohammad has ever met Tom Peters or read his books (which I would recommend) but if not I would say to Dr. Peters that His Highness practices MBWA not only that day but everyday. I can show you hundreds if not thousands of images of him walking around the city, attending exhibitions, and even in the desert where a group of Chinese tourist ran into him and he posed for a group picture.

So what can be learned and applied to my world of higher education?
• First: It’s important to be at your job on time. You never know who may walk in to get service or say hello.
• Second: Employees do watch managers and if they are on time and engaged with the clients in a friendly and professional way they will follow their lead.
• Third: In order to gain respect of your employees you must earn it. To be a manager does not mean you give orders and then do nothing. It can be done be walking around, asking questions, listening, providing encouragement and guidance. It seems Sheikh Mohammed does this and we all can learn from the style he employs.

The Ruler of Dubai is actively engaged with his stakeholders. He is in constant motion and is an advocate of a positive customer experience.

Tom if you happen to be reading this blog, and would like to meet him he is not hard to find. Just remember to have your walking shoes on. I think you two would find you have similar views on management and innovation.