American Colleges and Universities have seen massive growth in international student enrollment. In a period of 11 years, international students enrolled in undergraduate and graduate programs has nearly doubled to over 1,000,000 students by 2015-16. According to a study conducted by the National Association for Foreign Student Admissions using US Department of Education & Commerce data, the 1,043,839 foreign students contribute $32.8 billion to the US economy and 400,812 jobs. For every seven international students, a new job is created, and each student generates $31,422 in revenue.

Students come from around the world, and most are paying full tuition. They are bright, studious and believe the education they are receiving is of excellent quality and when they graduate they will be offered excellent job opportunities. Most citizens of Asia, Africa, and the Middle East believe American higher education is the best in the world and they are proud that they, their siblings, and children have an American degree.

However, the days of increased enrollment of international students may be quickly coming to an end.

We know the storm is coming and here are the signs.

Six higher education associations commissioned a survey (International Applicants for Fall 2017-Institutional & Applicant Perceptions) to determine if the 2016 Presidential campaign and its anti-foreign tone would have a chilling effect on international student recruitment. The initial findings were published in early March 2017, with over 250 colleges reporting nearly 40% of the schools are reporting a decline in international student applications. The respondents report the decline is occurring because students and families are concerned student visas will be more difficult to obtain, the United States is no longer as welcoming to international students. and the increased concern for international student safety (see chart below). There is no doubt a storm is about to occur. 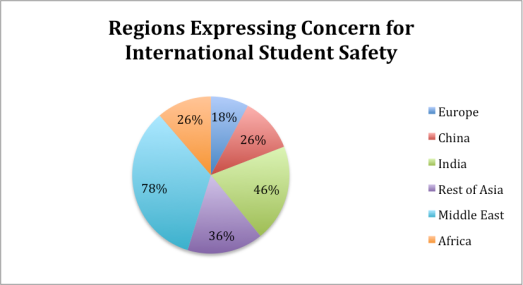 What can American higher education institutions do about the upcoming reduction in international students? Most universities have already implemented intense recruiting plans in the United States but according to a report by Western Interstate Commission for Higher Education the number of high school grads has stagnated and by 2022 will slowly decline. Non-traditional students and the expansion of distance-learning programs are also areas of expansion, but the market is highly competitive. The majority of students usually pay for the courses out of their own pocket. US students are becoming more reluctant to obtain large loans, and the proposed cutbacks in federal and state finance aid do not help the situation.

Some schools are attempting to attract students by upgrading their campuses, dorms, recreational facilities, and technology. These capital expenditures in some cases are being done via bonds and loans, which will be paid by increased tuition revenue. We have already seen a number of schools merge or close due to overwhelming debt. Finally, schools turn to reducing operating expenses, which likely means cutting faculty and staff. Continuous cutting seriously reduces the quality of the institution.

The economic impact of losing just 10-20% of the international student population would result in a loss of 3.28 to 6.56 billion dollars and a loss of 15,000 to 30,000 jobs. This could lead to an increase of closures and mergers. Government reports site at least 150 schools are in serious economic trouble. This number could easily double if universities do not address this issue of foreign student enrollment.

American colleges and universities need to re-visit and update their international strategic plans. An institutional audit is needed which gives the senior university cabinet officials a better grasp of the current situation, develop benchmark data, and create a plan that involves all of the stakeholders including the students.

According to the 2014 AIEA Senior International Officer (SIO) survey, their challenges were a lack of personnel/staffing, “buy-in” by faculty/administration, decentralization, balancing constituency demands, securing institutional commitment, and institutional leadership turnover. Institutions also need to re-enforce the concept to their community at large that International students mean more than just revenue. It gives American students and the community they live in the opportunity to learn more about outside cultures without solely relying on TV and social media. It enhances networking opportunities; students gain additional insight on how the world and business work in other nations, which one-day may mean finding a new business opportunity. It enhances the US student’s ability to find employment with firms who desire people with a broader international view. Perhaps the most compelling reason is it simply opens up a person’s eyes to the world of possibilities.

Many institutions state they have a goal to provide a global view to its students and the international students are important to their University. However, few President’s or Provosts have a clear plan to expand international enrollment or how to prevent losses. How much do they know about support and buy-in from faculty, staff, and trustees? Do they currently know how much support there is for international students from their local government officials and business leaders? If the university leadership does not clearly understand, how can they develop a credible plan to move forward?

Higher education institutions must take the magnitude of the coming storm seriously by conducting an evaluation of their institution for its strength and weaknesses seriously, make proper preparations and then aggressively move forward.

After all, Donald Trump and Mark Zuckerberg didn’t make all their money in the United States. They understood there was a whole world to market to.